Shopping Cart
Your Cart is Empty
Quantity:
Subtotal
Taxes
Shipping
Total
There was an error with PayPalClick here to try again

Thank you for your business!You should be receiving an order confirmation from Paypal shortly.Exit Shopping Cart

Thoughts by the fireside

Tabletop gaming in the land of the ancients

One of the many pastimes that I indulge my love of all things ancient, is tabletop wargaming. Along with my wife and friends, I re-fight long forgotten battles and play many “what if” battles to decide the fate of the ancient world. Using miniature models of mighty warbands and the luck of dice rolls, battle commences on my gaming table. For those unfamiliar with tabletop wargaming, here is a break down of what this hobby entails.

On a gaming surface that can range from 2’x 2’ to surfaces 8’x4’ in size, usually covered with terrain pieces representing hills, rivers, building and other landscape features. Two armies consisting of miniature models do battle using one of a multitude of rule systems. The miniatures for these games come in many scales. Some, where the miniatures are a few millimeters high, to miniatures where each character is 30mm high and beyond. These games can represent battles in a far-flung future, to conflicts set in fantasy worlds with dragons and monsters. The most popular of these games by far is Games Workshops Warhammer 40K. Set in a fictional far-off future this game contains many sci fi elements such as alien races and powerful war machines.

For those of us with a historical point of view, there are systems designed to meet our needs. The two main ones that I play are: Hail Caesar from Warlord Games and Saga from Gripping Beast, but there are many others out there. Both Hail Caesar and Saga deal with historical battles from before the advent of gun powder. Both companies produce a number of miniatures for their respective games at 28mm scale. Hail Caesar enables me to play games with armies consisting hundreds of miniatures while Saga deals with more skirmish level gameplay. 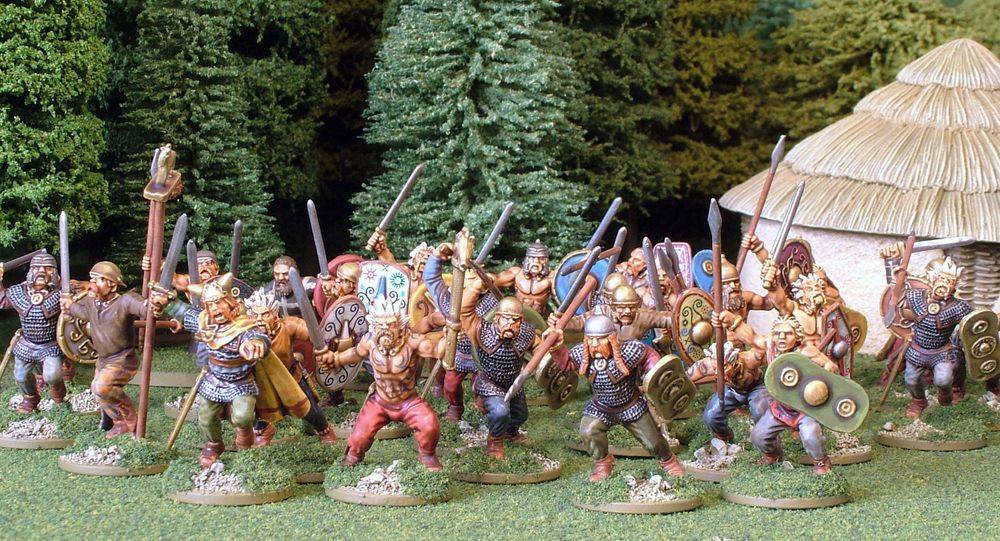 Tabletop wargaming can be a casual pursuit or an all-encompassing hobby taking up every bit of free time and disposable income. I fall somewhere in the middle. Wargaming can also cover many different interests within its broad appeal. As well as playing the actual battles, there is painting the miniatures and creating the terrain on which to battle around. Then there is the advent of home 3D printing which is gaining a prominent following within the community. There is also a whole industry centered around the needs of the gamer. From companies who sell miniature terrain to place on your gaming surface, to talented individuals who will paint you miniature army for you.

Every personality type can be found within the tabletop wargaming community. From power gamers, to casual gamers. From those who are sticklers for historical accuracy to those who are more flexible in the eye to detail. My experience of the community is overwhelmingly one of positive support and mutual respect. People love to see your latest painted miniature or newly built terrain piece and will offer advice and help whenever requested.

So, in my household you can often find me leading my Celtic Warband against the invading Romans/Viking/Saxons. Or maybe I will be commanding my Saxon force against a neighboring settlement. All the while fighting around my tabletop battlefield. If you are interested in giving tabletop wargaming a go, then search out your nearest gaming store or gaming club and you'll find an enthusiastic welcome and someone will usually offer to show you the ropes. Maybe I'll see you someday around the tabletop battlefield.

May your warband always be victorious and the dice gods smile upon you.

2021 has started off with a bang in the world of Archaeology! In Overstone, Northamptonshire the Museum of London Archaeology (MOLA) uncovered the largest Anglo-Saxon Cemetery and unknown bronze age burial and settlement.

Working over a 12-month period the MOLA archaeologists undertook a detailed excavation of a 15-hectare site, of which they uncovered a fantastic array of archaeology finds spanning over 4,000 years.

Numerous weapons of many kinds were also unearthed, including 15 shield bosses, 40 knives and 25 weapons, along with domestic objects such as bone combs and cosmetic kits.

Mr. Markus project manager at MOLA stated: “The excavations will help us understand the way people lived in both the Anglo-Saxon period, around 1,500 years ago as well as the Bronze Age, nearly 4,000 years ago. The human remains will tell us about diet, health and even the origins of the people themselves whilst their buildings can teach us what their day-to-day lives were like and how they utilized the local landscape in these two different periods”.

This is truly an amazing discovery and we at Shield Ravens are looking forward to seeing more about this exciting discovery!